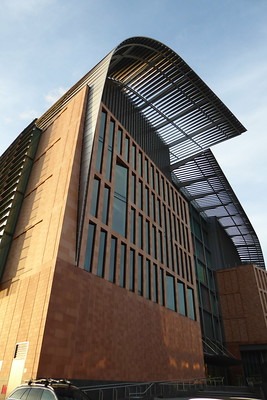 A new cure for cancer? 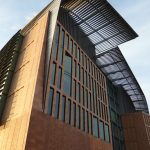 Scientists at the Francis Crick Institute in London have been investigating why some people who have never smoked still get lung cancer. They suggest that the defective DNA lies dormant in our cells until it is switched on by an external influence such as air pollution. The switch is a chemical trigger and, completely by accident, they have identified a drug used in treating cardiovascular conditions that disables this trigger.
Full Story.

Around 2% of motor neurone disease is caused by a faulty gene that makes a toxic protein but now Biogen has developed a drug that blocks the messenger RNA from this faulty gene and thus prevents the manufacture of the toxic protein.
Full Story.

Illinois and Lancaster Universities have collaborated to improve the efficiency of photosynthesis in soybeans. Too much light can damage the photosynthetic apparatus in the leaf so it has a xanthophyll quenching system that absorbs excess energy. When a cloud obscures the sun this quenching system is slowly turned off but the researchers discovered that over-expressing three genes caused this quenching system to turn off much more quickly and over a season of growth this can result in a 20% increase in final yield.
Full Story.

Extreme weather events cause plants to re-programme their genetic code, switching on some genes while silencing others. Scientists at Pennsylvania State University are sequencing the genes involved in this since artificially stimulating these genes could speed up the breeding of crops with greater resilience to environmental stress factors.
Full Story

Researchers at a university in The Philippines have used IT-based phenotyping platforms, molecular markers and novel breeding techniques to develop egg-plant (aubergine) varieties that have resistance to eggplant fruit and shoot borer and to leaf hopper attack.
Full Story

Pennsylvania State University is on a roll! They have also discovered that flavonoids extracted for sorghum leaves stunt the growth of the larvae of corn army worms when sprayed on to maize foliage and that this often leads to the death of the pests. Sounds to me like it makes the leaves unpalatable and the larvae starve. It is also potentially effective against other pests and they are doubtlessly working out ways to incorporate the genes for these flavonoids in the maize genome to avoid the need for extraction and spraying. Might be OK for maize destined for biomass but if it tastes bad, would animals want to eat it?
Full Story

Beans are a staple of the Brazilian diet and 3 crops of common beans can be grown in a single season. They are attacked by whitefly that act as virus vectors but scientists in Brazil have developed two transgenic lines of beans that cause significant mortality in adult whitefly that suck their sap while having no effect on non-target insects.
Full Story

Purple skinned tomatoes are known but The John Innes institute and the Sainsbury Centre have developed a transgenic tomato that also has purple flesh within the fruit. The purple pigment indicates increased anthocyanins in the fruit that are powerful antioxidants and so help prevent cancer and inflammation of organs. The genes for this have always been in the tomato genome but the team has found a way of activating these genes by splicing in a gene from the snapdragon plant. Tey are now approved for consumption in America but are not yet available here in the UK.
Full Story

Speciality crops with specific engineered traits are those that are coming to market soonest according to Raboresearch. CRISPR-Cas9 editing has now been around for 10 years and many companies are keen to test the market for these ‘superfoods’.
Full Story

Re-approval of MIR162 in Europe

The approval for use but not for cultivation of the GM maize MIR162 has been renewed by EFSA, the European Food safety authority. The MIR 162 maize has Lepidopteran insect resistance and EFSA found no new hazards when re-evaluating the data. Now that GB is out of Europe perhaps we can soon grow it here and export it to Europe:
Full Story

Triggering a plants immune system often result in a growth penalty but researchers at the Nanjing Agricultural University have discovered a way of minimising this cost by over-expressing the genes for spermidine and spermine production = two precursors of the hydrogen peroxide that the plant uses to combat the disease.
Full Story

People with Phenylketonuria or kidney disease are intolerant of gluten and so can not normally eat rice. However, researchers in China have used CRISPR-Cas9 editing to edit 7 genes in the rice genome to produce lines with low gluten content that they expect to produce viable commercial varieties with low gluten content for these sufferers:
Full Story

Saffron not from crocuses

Saffron is the most expensive spice in the world, being collected from the stigma of crocus flowers. Besides the colour and the flavour, the crocins it contains have therapeutic, antioxidant and sedative properties. Now a team at KAUST have engineered a production system for crocins in Gardenia, a common garden plant and also envisage developing crocin-rich foods such as rice by splicing the necessary genes into the rice genome.
Full Story

Pheremones are expensive and difficult to produce but now researchers at Lund University have engineered camelina, a common garden plant, to produce the pre-cursors of mating pheromones that will make the production considerable easier.
Full Story

Researchers at Oregon University have been experimenting with the use of GM yeasts in the production of beer and have discovered that it is possible to enhance the hop aroma of beer by using the modified yeast. Of course that also had to check that the flavour was as good as it should be but there is no data on the long-term effect of the ensuing hangover.
Full Story

• HB4 wheat with improved drought tolerance approved for food and feed use in Argentina, Australia, Brazil, Columbia, New Zealand, Nigeria and the USA.