The BCPC Award recognises outstanding contributions to UK crop production, in one or more of the areas of scientific advance, technology innovation, advisory and extension, education and training and regulatory affairs. 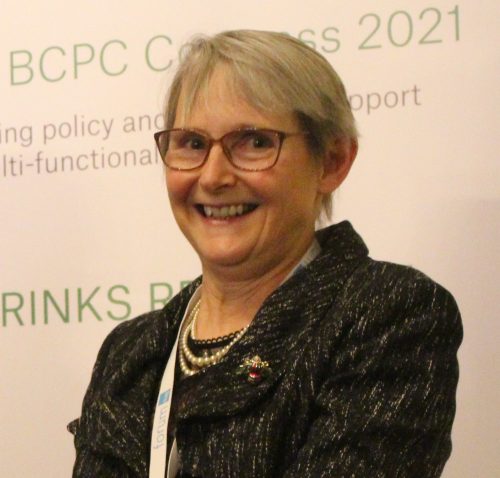 Jim Orson, member of the BCPC Advisory Board, presented this year’s BCPC Award to Jayne Wilder on Monday 1 November 2021 at the BCPC Congress, which took place at the Cedar Court Hotel, Harrogate. He thanked Jayne her for her expertise, commitment and enthusiasm in supporting the industry achieve the right balance between food production and its wider responsibilities.

Jayne Wilder graduated with a degree in Applied Biology from Chelsea College, London in 1981. It is here that she first learned about the Advisory Committee on Pesticides and its work, from guest lecturers Tony Hardy and Peter Stanley, and decided that this was something she wanted to be involved with.

She joined the Ministry of Agriculture, Fisheries and Food (MAFF) in 1982 working on land use and tenure policy.  She transferred to the science group in 1985 and joined the Pesticide Usage Survey Group, moving to Pesticides Registration in 1988.  She remained in regulatory work until retirement in 2020, leading teams responsible for pesticide new active substances, National and European committees, prior to European Food Safety Authority (EFSA), comparative assessment and substitution, administration, efficacy of pesticides and biocides, and finally implementation of EU exit for Plant Protection Products.

On receiving the award Jane said, “I am delighted to receive this award from BCPC. Looking back – I have seen the regulatory process in the UK has made significant improvements to the safety of pesticides for people and the environment while enabling agriculture to continue to develop and produce high quality food. Looking forward – crop protection is still a work in progress with many more interesting problems to resolve and new technologies to manage … Tempting though it is, I think I will leave that to others!”

Keep up-to-date with our FREE Newslink service
Get all the latest from the world of crop protection, agriculture, bioindustry and the environment, direct to your inbox
Sign up now