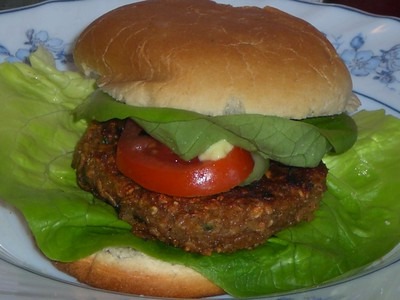 Meat grown in the laboratory requires stem cells from the animal in question and growth factor which currently also comes from animals. Now a greenhouse in Iceland is growing genetically-modified barley that has been engineered to produce this growth factor so it does not have to be harvested from animals. It is the next step in developing a meat source which does not require grazing animals and all the waste that they produce. As a more efficient system, will the price of meat come down? (Pic: F_A)
Full story

Porphyria is a build-up of toxic proteins in the body that causes severe pain which needs morphine or other strong opioids to numb the pain of sufferers. Now a new technique has been developed where monthly injections of a potion that silences the gene that produces the toxic protein leaves sufferers pain free. There are thoughts that the technique might be applicable to other medical problems.
Full Story.

Beetroot produce the purple dye betanin which has strong anti-oxidant effects and now scientists at the Leibniz Institute of Plant Biochemistry have inserted the gene for production of betanin into the tomato genome, resulting in purple tomatoes. Not only does this make the tomatoes healthier to eat, they also plan to use them as a source of purple dye to colour foods such as yoghurt. Why don’t they just use beetroot? Because the modified tomatoes are an even richer source of betanin than the original beetroot.
Full Story.

The global demand for palm oil is destroying tropical rain forests as it is replaced by palm plantations but now the company that developed high oleic soybean oil is planning to turn its attention to modifying the soybean to produce a viable palm oil alternative. If successful, they could have a real impact on tropical biodiversity and the important carbon sink that tropical forests represent:
Full Story

A collaboration between two Japanese universities and a start-up company sees the start of sales of gene-edited sea bream fish in Japan. The editing knocks out the production of a protein that suppresses muscle growth and so the edible part of the fish is 1.2 – 1.6 times larger than in un-edited fish and feed utilisation is improved by 14%. Is it something that body builders might be interested in?
Full Story

The fungus Laccaria bicolor normally associates with the roots of poplar, facilitating the uptake of nutrients from the soil by the tree. Now a team at the Oak Ridge Laboratory have transferred a gene from poplar into switch-grass that allows the fungus to form a similar relationship with the grass. Switch-grass is an important biofuel source and this modification allows it to grow much more vigorously on more marginal land where nutrients are harder to secure.
Full Story

Growing food in space to feed astronauts needs to be as efficient as possible and a team has compiled a ‘wish list’ of the traits that they would like to see in space crops. They concentrate on potatoes but some or even all of the traits would also be nice to have in crops grown down here on earth.
Full Story

It is only in Arabidopsis at the moment but a team at the Chonnam National University in China has used CRISPR-Cas9 editing to confer tolerance of sulfamethoxazole herbicides. The edited Arabidopsis also has improved tolerance of heavy metals such as cadmium and other sulphonamide compounds such as amisulbron. However, an internet search suggests that sulfamethoxazole is an antibiotic used to treat bacterial infections, not a herbicide and of course amisulbron is a fungicide used in potatoes. Could something have been lost in translation? I have queried this but as yet have not received a reply.
Full Story

To edit a gene you first have to break it and the cell has several systems for repairing this damage. Now Princeton University has developed a technique for examining the genes involved in the repair and they expect it to improve CRISPR-Cas9 editing accuracy.
Full Story

GM soybean that have been modified to improve the drought-tolerance show improved vegetative growth compared to un-modified soybeans but now a study has confirmed that they also show better growth during the seedling and the reproductive stages.
Full Story