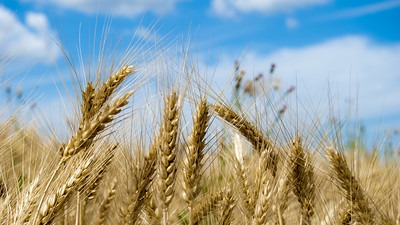 Nitrification of applied (very expensive) nitrogen promotes nitrogen loss to ground and surface waters and some products such as N-Serve from Dow have been used to try to slow this process. Now a collaboration of several universities has found a naturally-occurring gene in wheat grass that affects this process and they have crossed it with a high-yielding commercial wheat variety to try to stem these losses.
Pic: Santa Claus.  Full Story.

Some people have a faulty gene in their skin that makes it very fragile. Now a team at Stamford University have harnessed a modified Herpes virus to deliver a functioning copy of the gene via a gel that is simply rubbed onto the skin.
Full story

Scientists in Cambridge have used the cloning techniques that created Dolly the sheep to rejuvenate the skin cells of a 30 year old woman by 30 years. They are hopeful that the technique can also be applied to other tissues such as muscle, liver and blood cells but it is very much a work in progress.
Full Story.

The AstraZeneca corona virus is based on artificial Messenger RNA which RNA uses to instruct the cells what to make. Now this is a hot topic of research and now a team at Moderna Therapeutics are synthesising artificial MRNA to instruct the heart to make new muscle fibres when it has been damaged by a heart attack. Is this the start of a whole new field of medical treatment?
Full Story

Many crops do not self-fertilise. They recognise their own pollen and trigger a cell suicide programme when self-fertilisation occurs. Now the gene controlling this process has been identified and, when switched off, allows flowering plants to self-fertilise. It is though that this could allow breeders to develop more resilient crops.
Full Story

Pearl millet is a staple food of sub-Saharan Africa and is rich in protein, minerals and dietary fibre. The International Crops Research Institute has developed a new variety that has increased iron and zinc content, resistance to downy mildew, matures 40 days earlier and shows o 30% yield increase over currently grown varieties.
Full Story

The EU has renewed the approval of the GM cotton GHB614 and has granted approval for food and feed use of three new GM crops – oilseed rape 73496, cotton GHB811 and soybean GMB151. However, the approval does not include approval for cultivations so while these crops can be imported, they cannot be grown in Europe:
OSR 73496
GHB811
GMB151

Three gene-edited maize varieties modified using CRISPR-cas9 editing are being evaluated in field trials in Belgium to see if the modifications actually do make them more resilient to climate stress and improve the digestibility as claimed.
Full Story

Oxitec have released 5 million male mosquitoes in the Florida Keys that carry a gene that means that any female offspring die before they can breed. The results of a study collecting the eggs of the mosquito breeding confirm that the technique works and larger studies are planned. The aim is to reduce the mosquito population in the area.
Full Story

Modifying the photosynthetic process of poplar trees has produced a variety that grows faster and has a 53% increase in above-ground biomass. Since half of this biomass is carbon, it is though that growing these trees could help removed even more carbon from the atmosphere than un-edited trees and will help reduce the threat of global warming.
Full Story

A team at Washington State University have discovered that, while plants have natural defences against fungal attack, Sclerotinia has evolved a protein hat deactivates these proteins. Deleting the gene from the fungus makes it much less pathogenic and now that just need to develop a method of easily blocking its production such as mRNA:
Full Story