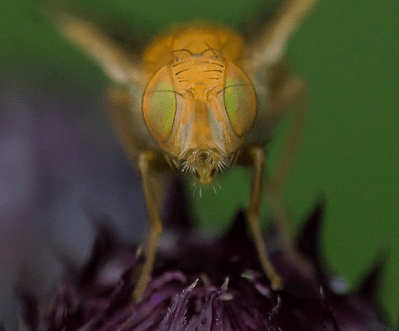 GM flies to the rescue

A company in Oxfordshire has replicated the lethal gene that has been used to control some mosquito populations in to fruit flies and now trials on the efficacy and safety of the release are underway in Australia where it is hoped that damage to fruit crops can be reduced. Full story
Pic: Philip McErlean

Simple COVID-19 testing
The University of Connecticut are developing a rapid test for the Covid-19 virus that uses a CRISPR-based diagnostic system. Once available, minor editing will make it sensitive to other future virus outbreaks: Full Story.

Novel Septoria treatment
Exeter University have discovered that mono-alkyl chain lipophilic cations can protect wheat and rice against Septoria infections. This is a new branch of chemistry from which it could be possible to develop new fungicide actives: Full Story

White flour not as bad as you thought
Rothamsted has countered the fears of reduced genetic diversity in modern wheats by showing that flour from modern wheats has more dietary fibre than flour made from wheat varieties grown 200 years ago: Full Story

Accelerating vaccine production
Vaccines are produced by growing them in animal or plant cells but researchers at Northwestern and Cornell universities have taken the manufacturing mechanism out of bacterial cells and are running it in a test tube. They claim that this can speed up the production of the vaccine ten-fold: Full Story

Biofuel production efficiency
Growing crops for fuel rather than for food is often criticised but the Berkley Laboratory has shown that GM crops are used to produce high value chemicals and then, after extraction of the high value chemical, the crop waste is used to produce ethanol, it can compete on a cost basis with petrol made from oil pumped out of the ground: Full Story

Fusarium ear blight resistance
A team of researchers from America and China have found a gene in Thinopyrum wheatgrass that confers resistance to Fusarium graminearum and thus prevents the production of the mycotoxins that lead to rejection of some wheat crops. The next task is to breed this gene in to elite wheat lines and develop some commercial varieties: Full Story

CRISPR-Cas9 is not the only game in town
A new technique for editing genes called Cas-CLOVER has been developed by Hera Biolabs. It uses a different nuclease protein and is claimed to have no off-target breaks while maintaining the editing efficiency of CRISPR-Cas9: Full Story

New powdery mildew resistance
A new resistance to powdery mildew has been found in wild wheat. Chinese researchers have found that certain alleles of the Pm60a’ gene gave previously unknown resistance and they have created molecular markers to differentiate between functional and non-functional alleles. Now it has to be bred into commercial varieties of wheat: Full Story

Vitamin E enriched sweetcorn
Vitamin E acts as a lipid-soluble antioxidant in sweetcorn kernels and researchers at the Guangdong Academy have identified the genes involved in its production. Using marker-assisted selection they have produced two cultivars with elevated levels of vitamin E: Full Story

Rothamsted combats herbicide resistance in weeds
Rothamsted has identified the genes that allow weeds to detoxify herbicides that would normally control them and by using a virus that carries an ‘off-switch’ for this gene, they have restored susceptibility to previously resistant plants. Now they have to develop a way of using it in the field that doesn’t also make the crop sensitive to the herbicide: Full Story

Over-fishing of tuna is depleting stocks but now a company has produced a tuna substitute from sea-water, algae and plant proteins and then used biotechnology to achieve the required texture and taste of tuna. Besides selling the tuna substitute, they also plan to licence their techniques to other firms who wish to produce other meat substitutes. Full Story

Better berry production
A berry breeder plans to use CRISPR editing to improve the flavour and shelf-life of berries such as raspberries and blackberries. They hope to make berries available all year round which would avoid the need to fly them in from other parts of the world: Full Story

The longevity gene
Annual plants tend to die once they have flowered and set seed but now researchers at the University of Leiden have prolonged the life of Arabidopsis by over-expressing the AHL 15 gene which they have called The Rejuvenator. Perhaps this could be used on annual crops such as wheat and rice: Full Story

Heat-tolerant rice gives better yields
Excessive heat can damage the D! complex in Photosystem II and this complex is made by genes carried within the chloroplast. A researcher at the Chinese Academy of Science tried inserting a gene coupled with a DNA string that makes it more tolerant to heat into the cell’s nucleus, i.e. not into the chloroplast. It functioned just as well, conferred the heat tolerance required but unexpectedly, also performed better at normal temperatures and in rice has given a 20% yield increase: Full Story