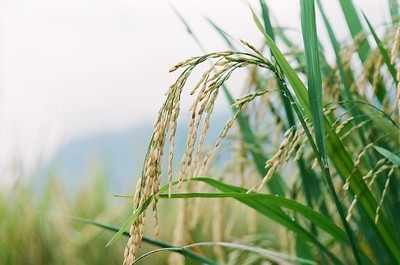 Rice with an enhanced proton pump 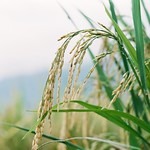 Researchers at Nagoya University in Japan have developed rice with an over-expressed gene for the plasma membrane proton pump that powers the transpiration flow by opening the stomata in the leaves. This brings more nutrients up from the roots to the leaves and can produce higher yields with less fertiliser in paddy-grown rice where water supply is not a problem. Yield increases of up to 30% have been obtained. Pic: ePi.Longo
Full story

Plans are being considered to control the population of grey squirrels by releasing gene-edited individuals that contain a gene that ensures all off-spring are male. The purpose is to allow the spread of the native red squirrel and to reduce the damage to young trees so that H M Government can meet its pledge to establish more trees to reduce global warming. Full Story.

A team at Clemson University in America is attempting to develop new varieties of wheat and peanuts that are less allogenic. Gluten genes are scattered throughout the DNA of these plants and they are attempting to disrupt these genes using CRISPR editing since reactions to the gluten have been known to kill some people. Full Story

Sclerotinia can reduce rape yields by up to 50% but Cibus, a company with offices in California, Canada and Holland have used gene-editing to develop varieties of oilseed rape that have shown resistance to Sclerotinia in field trials and they plan to use these varieties to develop commercial varieties with this trait. Because this is gene editing and not the introduction of foreign genes they are keen to stress that this is not ‘GM’. Full Story

The University of Calgary has also been gene-editing oilseed rape and with just one gene change they have produced a shorter plant with more branches that they hope will lead to higher yields. Full Story

The mosquitoes that spread Zika virus have already been reduced by releasing gene- edited males that breed with females to produce larvae that do not reach maturity but the University of Missouri has gone a step further in producing gene-edited mosquitoes which prevent the virus from replicating within them. These mosquitoes will still bite you but will not pass on the Zika virus and so are less likely to have unexpected effects on the local ecology. The altered gene is inheritable so future generations of mosquitoes will also be unable to pass on the Zika virus. Full Story

Researchers at the University of Delhi have discovered that the wheat oxalate oxidase gene metabolises oxalic acid to produce CO2 and hydrogen peroxide and that this process inhibits the infection of brown mustard by Sclerotinia. They have inserted this gene into some Brassica lines and the transgenic plants have shown reduced susceptibility to Sclerotinia. Full Story

An international team led by the Donald Danforth Plant Science Centre has used RNAi-mediated techniques to develop cassava that is resistant to two viral diseases (mosaic and brown streak disease) whilst also having increased levels of zinc and iron content that is nutritionally significant and is retained during food processing and cooking. Full Story

The Sainsbury Laboratory and Wageningen University have found a gene in an ancestor of black nightshade that, when spliced in to the genome of Maris Piper, confers resistance to all known races of Phytophthera infestans (Potato blight). With many crops of potatoes currently receiving fungicide sprays every 10 – 14 days during blight infection periods, this would be a game changer for potato husbandry. Full Story

Banana crops around the world are all clones of the Cavendish banana that was grown initially at Chatsworth House and this lack of genetic diversity puts it at risk of a pandemic of Panama disease that could wipe it out. However, researchers at the Queensland University of Technology have discovered that wild bananas have the RGA2 gene that makes the resistant to this disease and by using CRISPR editing, have been able to develop a line of cavendih bananas that are also resistant to Panama disease. Full Story

Australia has a big problem with herbicide-resistant ryegrass and now researchers have identified the gene responsible for enhanced metabolic resistance that detoxifies herbicides with several different modes of action. They plan to use this knowledge to screen for herbicides that are not affected by this gene but perhaps they could ad an RNAi component to a herbicide formulation that switches off this gene. Full Story

Researchers at the John Innes centre have identified a gene in the wheat genome that facilitates the infection of the wheat with yellow rust. Deleting this gene severely limited the level of infection and provides new lines for research in to the control of yellow rust and stem rust in wheat. Full Story