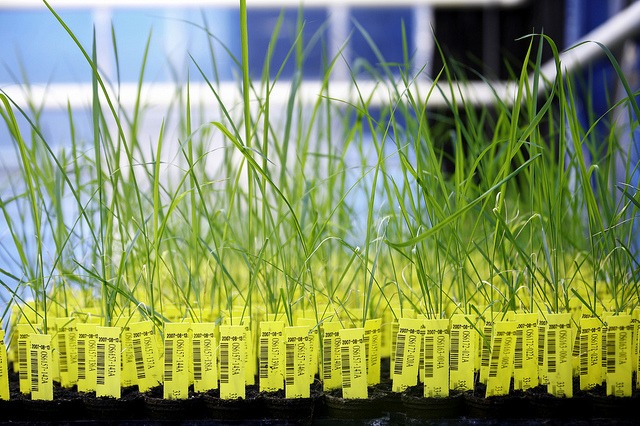 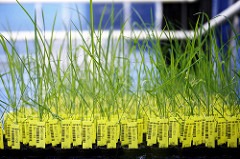 Gene drives have already been developed for insects for stopping vector-borne diseases. Gene drives introduce new genes into a gene pool which are inherited by all offspring of a mating event instead of the usual 50% suggesting that it must be spliced into both the ‘X’ and ‘Y’ chromosomes. There is much debate about how this irreversible technology should be regulated but now the University of California have developed the first CRISPR-Cas9 based gene drive in plants with the aim of reducing disease and increasing drought tolerance.
Full story

A peer-reviewed report published by the EU concludes that glyphosate does not cause cancer and poses minimal risk to human health and to the environment.
Full Story

As global temperatures rise a team at Adelaide University and Shanghai Jiao Tong University have identified a protein in barley that regulates the number of flowers when the plant is exposed to high temperatures. Editing out this protein produced plants that bear more flowers at high temperatures. Next they have to ensure that the plant has sufficient resources to convert these flowers to filled grains.
Full Story

CRISPR is normally associated with something like Cas9 for gene editing but at Maryland University they have developed CRISPR 3.0 which they use for super-activating specific genes that are already present in plants. It can increase the activity of up to seven genes simultaneously and they believe that they can use this to create better crops for the future.
Full Story

Harvard University has developed a facemask that detects COVID-19 virus particles in the breath of the wearer within 90 minutes of exposure at accuracy levels similar to PCR tests. This could be a way of identifying hose key workers who should not be at work.
Full Story

The University of Natural Resources and Life Sciences in Austria have discovered that microbes from a cow’s rumen can break down three types of plastic and now the race is on to develop a plastic recycling process that doesn’t involve burning it. Hopefully it doesn’t result in methane production because that is a more potent global warming gas than CO2!
Full Story

A CABBI Post-doc at Florida University has revealed a CRISPR-Cas9 edited sugarcane that has had a number of genes turned off. This has resulted in a plant that has less chlorophyll and so is light green/yellow in colour. Despite this it shows no reduction in biomass production and so may require less applied nitrogen. Further editing has produced a plant that is also herbicide resistant and it is expected that versions of sugarcane could become part of the bio-economy market.
Full Story

Two research centres in Australia have developed CRISPR method of eliminating abnormal RNA molecules that are known to cause cancer in children. They now realise that this system can also be used to stop virus particles such as COVID-19 from replicating in infected human cells and are about to embark on animal studies to test the treatment.
Full Story

Vivaldi Biosciences have developed a genetically-engineered vaccine that pre-clinical trials indicate is effective against both COVID-19 and flu. Inhaling a nasal spray prevents the virus from replicating in the upper respiratory tract and thus significantly reduces transmission to other individuals.
Full Story

Higher yields in rice and potatoes

The compound m6A RNA controls growth rates in plants like rice and potatoes and a joint study by the universities of Chicago, Peking and Guizhou have discovered that adding in a gene that encodes for the protein FTO affects m6A resulting in longer root growth yielding 50% yield increases and better drought tolerance in field tests on both rice and potatoes.
Full Story

Tall wheatgrass is resistant to stem rust and now the gene for this resistance has been built into a transgene cassette together with another resistance gene that can be slotted into the genome of commercial wheat varieties to transfer this resistance.
Full Story

Tall wheatgrass is resistant to stem rust and now the gene for this resistance has been built into a transgene cassette together with another resistance gene that can be slotted into the genome of commercial wheat varieties to transfer this resistance.
Full Story

• Event EE1 – Bt Eggplant resistant to Lepidopteran insects has been approved for food, feed and processing use in the Philippines.