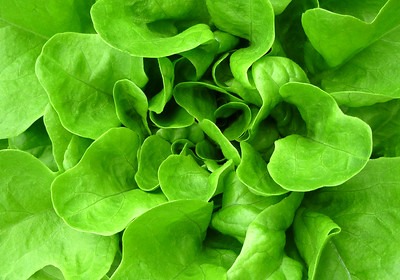 Astronauts that spend a long time in space can suffer from a loss of bone density due to the reduced gravity but now a team at the University of California have developed a genetically-modified lettuce that produces a drug that can offset this loss and that can be grown in space to provide the astronauts with fresh green leaves to eat. Pic: Mel Edwards. Full Story.

While Europe bans neonicotinoids to ensure no harmful effects to bees, America is spraying apple and pear orchards with streptomycin to control the bacterial disease fire blight. A study has shown that bees exposed to the streptomycin are less active and collect less pollen than those that are not exposed to the antibiotic.
Full Story.

An elixir of youth

Some people try blood transfusions from young people to recapture that youthful zest for life and now a study has produced some evidence supporting that hope. Young mice blood contains packets of chemicals (extracellular vesicles) budded off from dividing cells that, when injected in to old mice, restores grip strength, stamina and motor coordination. Sadly the effect wears off after a couple of months but another injection can restore it.
Full story

An evaluation of BT maize in Uganda has confirmed a reduction of leaf damage and stem attack that has led to yield increases of 30 – 80%.
Full Story.

A relative of Arabidopsis has yielded a trait that can be used to confer salt tolerance to cotton which could allow the crop to be grown on more land but could also boost yields in areas where it is already grown.
Full Story

Scientists in Korea have used gene editing to alter three enzymes in tomatoes. The benefits of changes to PDS and EPSPS enzymes are unclear but the changes to the ALS enzyme can confer tolerance of ALS herbicides similar to the naturally-occurring tolerance recently introduced in sugar beet.
Full Story

Scientists at the Max Planck Institute and the Ludwig Maximillian University have decoded the entire genome of potatoes and this knowledge is to be used to develop improved varieties for future cropping. The following link takes you to the German text which can be translated by computer.
Full Story

Researchers at Kansas University have found that varying the expression of various genes in wheat can affect the grain size and final yields. This knowledge can possibly be used to optimise yields of new varieties.
Full Story

Pilot studies in Brazil have shown that release of Oxitec’s ‘Friendly’ male army worms can reduce the populations of army worms due to the males carrying a male only trait and that this reduction will help to protect the Bt maize that is grown there from resistance developing in the wild population. It is very target specific and has no effect on other species such as bees.
Full Story

The USDA has decided that gene-edited beef cattle that have shorter hair than unedited cattle pose no safety concerns and can be marketed without waiting for a specific approval:
Full Story

The EFSA finds no safety concerns in GM maize with stacked traits for insect resistance and tolerance of glyphosate and glufosinate. This permits the import of these crops but it still does not allow them to be grown in Europe.
Full Story

An international team has identified the specific gene that confers resistance to stripe rust in the African bread wheat variety ‘Kariega’ and now this trait can be transferred to other varieties.
Full Story

Colorado University has developed a spray that contains antisense oligonucleotides that penetrate the leaves of the weed Palmer amaranth and silence essential genes in the weed. Palmer amaranth has developed resistance to a number of herbicides but this spray is specific to this weed and has no effect on the crop or non-target organisms.
Full Story

The University of Washington has compared crops grown on land under regenerative farming management with crops grown on adjacent conventionally farmed land and has shown that the regenerative farming crops have higher levels of vitamins, minerals and other phytochemicals. They don’t give any comparison of the yields achieved though and perhaps the higher levels of vitamins etc are simply due to them being distributed through lower yielding crops.
Full Story

Sugarcane with overexpressed sucrose-phosphate synthase has been trialled in Indonesia has shown increased tiller number, height and yield than conventional varieties without affecting bacterial diversity or gene horizontal flow in the soil.
Full Story

GM barley trials in the UK

Fertiliser prices have gone through the roof and NIAB in conjunction with Cambridge University at the Crop Science Centre are to trial gene modified and gene edited lines of barley to see if they can improve the nitrogen and phosphorus uptake of the plants and make them less reliant on applied fertilisers. If successful on barley, it could be rolled out to other crops.
Full Story

Palm oil is widely used in many products but the proliferation of palm plantations is responsible for a lot of habitat loss throughout the world. Now a team at Nanyang technological University in Singapore have developed a technique for producing the oil from common microalgae.
Full Story

Zhejiang University in China has developed a genetically modified maize that has insect resistant traits and a 5 year study has shown it can give up to 96% reduction in corn borer damage and a 6 – 10% yield increase over conventional varieties.
Full Story