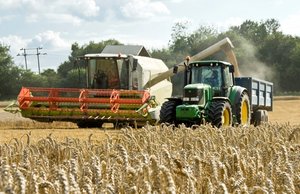 Posted by Jim Orson, NIAB TAG and BCPC Board of Management 30 June 2017

Eric Watson, who has just broken the world wheat record with 16.791 t/ha, stayed with us over the weekend after Cereals. He spoke at a seminar at NIAB on the Friday and we visited farms over the next two days.

I first visited Eric and Maxine in NZ around 20 years ago. It was clear to me then that they could break the world record if they were prepared to go through the bureaucratic process. Their farm has superb soils, their weather (plus irrigation) supports very high yields and their attention to detail is amazing. At that time, Eric was about to take the decision not to have root crops and onions on the farm because of soil damage, either from intensively working the soil or due to trailer traffic.

The soil in the high yielding parts of the farm is 30-40 cm of superb silty loam over around a metre or so of silty clay loam. It is then very gravelly. I am particularly interested in the soil type in terms of the nitrogen dose used for the world record yield. Some people express surprise that they used ‘only’ 258 kg N/Ha applied as urea treated with a urease inhibitor. I think Eric was also surprised because he had used more in previous years but is now convinced that the higher doses may have been inhibiting yield rather than encouraging higher yields.

The record breaking crop followed after a two year break from cereals and the previous crop was beetroot for seed. The soil mineral nitrogen (SMN) was 109 kg N/ha which firmly puts the field in nitrogen index 4 in the new RB 209. Soil tests indicated that the level of mineralisable N was 40 kg N/ha, although such analyses may not be very accurate.

I think that in RB 209 the soil type would be classified as a deep silt. In this case it recommends 100 kg N/ha for an 8 t/ha crop and 200 kg N/ha for a 13 t/ha. There are no yield adjusted recommendations above 13 t/ha but if the same rule of an extra 20 kg N/ha is applied for every tonne above 8 t/ha then a 16.8 t/ha should receive 280 kg N/ha. The crop would receive 245-255 kg N/ha using the NIAB TAG recommendations. Of course we do not know the actual optimum for the world record crop but its protein content was around 11%, suggesting that the dose was approximately correct. It is comforting that these two UK systems recommend similar levels of nitrogen to the approach adopted in New Zealand to produce the record yield. Perhaps we are making some progress at last.

In the world record crop, the total nitrogen removed in the grain was 319 kg/ha. This suggests that the combined amount in the grain and the straw was over 400 kg N/ha. Once again this demonstrates that in high yielding crops the efficiency of use of applied N and SMN is well above average and also that net nitrogen mineralisation can often exceed that estimated. All this helps to explain why using average data in a balance sheet of nitrogen supply and requirement for potentially very high yielding crops often recommends far too high nitrogen doses. Hence, previous experience in field trials still provides the most reliable guide to recommended nitrogen doses; albeit, this is an admission of our failure to understand sufficiently soil processes.

Finally, food for thought… The yield map of the world record crop shows that there were significant parts of the field approaching 20 t/ha. The lower yielding parts of the field tended to be in straight lines showing the impact of the tramlines and/or the wheelings of the linear boom irrigator. The NIAB TAG guidelines take such yield variation into account and assume that significant areas of a ‘X’ t/ha crop will have yields of ‘X+2’ t/ha. The other thing to take from the yield map is that there is more to come!