10th June 2016
print
I cannot remember the exact year when I spoke at a large conference on the possible introduction of GM crops into the UK. It was perhaps the final year or two of the last century. After contacting a few aid charities I felt able to say with confidence that the number of undernourished people in the world was falling. However, I mentioned my concern that in Northern Europe we had almost exhausted the potentials of pesticides and crop nutrition. This was the main premise of my support for GM crops.

The statement that the number of undernourished people in the world was falling seemed to enrage the green groups present. I still do not know exactly why but shortly after my talk they posted reports on the web saying that I was wrong. However, as usual, they produced no evidence. I can only assume that they wanted to present conventional farming as failing to feed the world.

There is now a great database on the web that allows me, as well as the green blob, to obtain a more precise guide. This database is faostat3 produced by the Food and Agriculture Organization of the United Nations. All the data in this blog is as presented in faostat3.

This confirms that the number of undernourished people in the world was indeed falling at the time of my talk (see the first figure). The period covered in this figure (1991-2015) was a time of rapid expansion of the world population which meant that the proportion of undernourished people was falling more rapidly than the absolute numbers indicate. Unfortunately, the numbers rose in the early years of this century before falling significantly over the last ten years or so.

What is more heartening is the fact that the world food supply, in terms of Kcalories per person per day, is still rising significantly (second figure).

The third figure shows (in millions of tonnes) that the world wheat production continues to rise. The area of wheat grown in the world has remained roughly the same since 1975 and so the increase in production comes from improved yields (the fourth figure with yields quoted in one tenths of a tonne/ha). Over all, this is good news for the environment because the greatest environmental damage results from destroying wild vegetation in order to provide arable land.

In fact, since 1975, the annual average growth rate of the area of wheat in the world has been slightly negative whilst production and yield has increased by between one and two percent per annum (fifth figure).

The sobering fact is that much of the continued rise in wheat production has come from Asia, which accounts for about 45% of the world’s wheat production. China and India are easily the world’s top two wheat producers. Reassuringly, Africa is increasing production, in percentage terms, at a faster rate than any of the major continents (sixth figure). 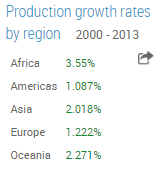 With such increases in wheat production, was I too parochial when I made the argument that we needed GM to help feed the world’s future population? I believe not. Remember that GM crops were introduced in the US in 1996 and that there are currently around 180 million hectares of these crops grown annually in the world (around 14% of the world’s area used for the production of primary crops). The green blob has downplayed this amazing rate of adoption, saying that it is a failed technology. They are obviously using the same approach as in the late 1990s when they challenged conventional agriculture’s ability to reduce world hunger.

GM crops have contributed to some increases in yield, but not in wheat, but there is a lot more to come from both it and the more recently introduced biotech-based developments. We need these developments because pesticide resistance and availability are challenging our ability to maintain production at current levels. However, will we ever see the widespread introduction of GM and other biotech-based products in Europe? That is not easy to answer but significantly, the green blob are having increasing problems with the press who have realised that such approaches, properly regulated, can be a force for good.