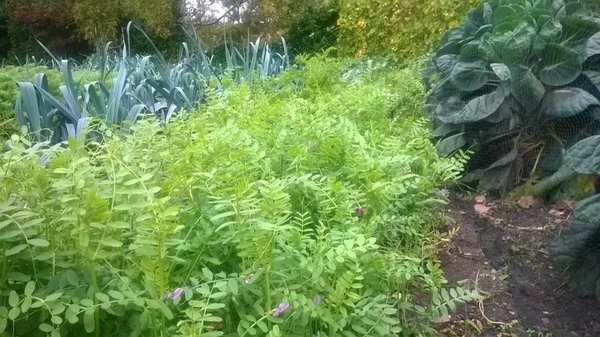 Where does all the nitrogen go?

I have tried cover crops on my allotment over the last year. They looked great in mid-October (see pictures), with the late-summer sown phacelia and vetch growing to an enormous size before being killed by the mild frosts of this last winter. Early-autumn sown spring oats also grew rapidly to a huge size but the winter only killed about half the plants.

The following spring-sown vegetable crops are now growing well where I dug the ground before sowing the cover crops but not where I have not dug or deep cultivated the soil for a year or two. So I have reluctantly decided that digging is still currently required before sowing or after removing the cover crops. I have also decided that the only cover crop that I will continue to grow is spring oats. The seed is cheap (well free!), establishment is more reliable and the soil is in good shape afterwards. In addition, there are no disease implications for the vegetable crops I grow.

Over the spring I have witnessed a few large scale on-farm experiences with autumn-sown cover crops. Their impact seems to have been favourable where the soil has been light enough to carry out sufficient cultivation prior to establishing spring-sown crops. A few half-field observations suggest a more vigourous spring-sown crop after cover crops. However, there is an active debate about the economic benefits of cover cropping, particularly on the heavier soils.

One intriguing aspect of autumn-sown cover crops is that they significantly reduce over-winter nitrate leaching but UK trials suggest that there is no opportunity to reduce nitrogen application to the following spring-sown crop. So what is going on? What happens to the nitrogen that has been prevented from leaching to the lower layers of the soil or to the drains?

There is a cover crop experiment in France investigating the impact of a late summer/early autumn-sown white mustard cover crop in a winter wheat, spring barley, spring pea rotation. A paper written after the first 12 years of the experiment confirms that the reduced nitrate leaching over winter does not reduce the economic optimum nitrogen dose for cereal crops. The measurements taken show that much of the nitrogen saved from leaching goes into storage in the soil organic matter.

Modelling based on the results of this and two other long-term cover crop trials in France suggest that over time, the benefit of cover crops reducing nitrate leaching decreases. However, it concludes that after twenty years or more, the economic optimum dose of nitrogen for crops can be reduced by around 20-24 kg N/ha and that this reduced dose restores much of the benefit of reduced nitrate leaching with autumn-sown cover crops.

In the UK winter cropping may well have similar nitrogen dynamics to spring cropping plus autumn-sown cover crops. Hence, interpreting this French research in terms of practical implications for the UK is, to say the least, difficult. However, I am relieved that the modelling work provides the possible long-term implications for the nitrogen that is prevented from leaching over the winter by the introduction of autumn-sown cover crops and also the possible impact on nitrogen fertiliser requirements.