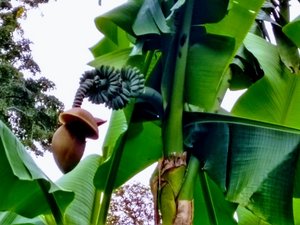 The summer of 2018 is clearly summed up by the autumnal picture of a banana tree in Clare College gardens, just down river from our house in Cambridge. It was hot and also it was very dry from late April onwards. In the UK, dry summers are often associated with high wheat yields but in my blog, written in early July (blog posted on 13 July), I suggested that it might perhaps prove too dry in 2018 and that wheat yields could be significantly down on average. The Defra statistics, released just before Christmas, show that yields were down by around 6% in the UK and 5% in England (see Table), when compared to the average yield for the previous five years.

So how good was my prediction? I suppose it all depends on what is meant by ‘significant’. I must admit that I was pleasantly surprised by the overall yields but some farms in the very driest parts of the country were well down. In East Anglia much depended on the amount of rain that fell in the last week of May. The West Midland regional yield was down by 9% compared to the average of the previous five harvests. The late spring and summer was particularly hot and dry in that region and the lighter soils, in particular, must have suffered.

In Scotland and the North West of England yields were down by around 18-20%. Unlike the rest of England, the establishment conditions in these areas were far from ideal and the growing conditions during the winter and early spring were hostile to plant growth. As a result the wheat crop was poorly developed when the drought conditions occurred.

As one would expect, second wheats were often particularly low in yield. In this rotational situation one would normally expect antagonistic soil biota to reduce root growth and hence restrict access to soil water during the prevailing extremely dry conditions.

Perhaps I can tentatively congratulate myself on my prediction if a reduction in average yield of 6% can be called ‘significant’. On the other hand, it may be that I have again over-estimated the impact of dry conditions on final yields. As I have said in previous blogs, solar radiation is typically above average in dry summers and this can more than compensate for a moderate lack of moisture. However, this year was so hot and dry that the very high levels of solar radiation could not compensate for the impact of high soil moisture deficits and for the much shorter period of grain fill that occurred as a result of the high average temperatures.

As I mentioned in my previous blog, the drought in the summer of 2018 was less severe than in 1976 when I was seeing crops showing drought symptoms as early as the end of April. In contrast, at that time of year in 2018 the soil moisture deficits were low or non-existent. This may explain why UK average wheat yields were down by 12% in 1976 rather than the 6% of this year. So, it could have been worse! Overall we must be very thankful that our wheat yields are so resilient from year to year.