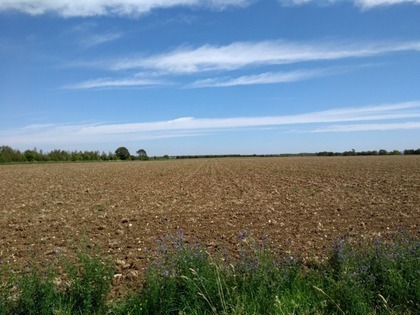 We was robbed by the climate change lobby

Our youngest grandson is a self-proclaimed ‘quality artist’. This notion must have been put into his head by one of his teachers. However, despite this ability, the four-year old recently confided to his mother that he found drawing bananas ‘complicated’. If he thinks that is complicated, he should try comprehending the impact of farming on greenhouse gas (GHG) production!

(Image shows A bare fallow just starting to green up near Cambridge at the end of July 2020. Carbon losses can be minimised by planting a cover crop as soon as pragmatically possible.)

I must admit that after reading a few scientific papers on the subject I would like to cry out ‘hey ref’. The Intergovernmental Panel on Climate Change (IPCC) says that agriculture is a major source of GHGs.  How can this be? Agriculture by its very nature takes, through photosynthesis, carbon dioxide out of the air to produce food.  Surely the production of carbon-based carbohydrates (the clue is in the name), fibres, proteins and oils by using the major greenhouse gas as its feed stock is a huge plus? To put it again into football terms, I feel that ‘we was robbed’.  The populace should surely applaud farmers for their skill and diligence in capturing carbon dioxide rather than seeing them as climate villains.

It comes down, as in all life-cycle analyses, to where the boundaries are drawn.  The IPCC does not take the amount of carbon in the harvested crops and their residues into account. I find this a strange notion as does at least one academic. Surely it is the farmers who mastermind the capturing of carbon from the air and produce food and it is the consumers who exhale much of it, as carbon dioxide, to the atmosphere?

However, I can partly understand why the IPCC decided generally to ignore the carbon captured in food production.  Much of it is released back into the atmosphere within a year and so for the sake of simplicity, IPCC has presumably decided to disregard it.  However, perhaps it should more openly acknowledge the approach it has adopted when declaring the percentage of total GHGs that comes from agriculture.

How much carbon dioxide is captured by crops?

Finding details of how much carbon dioxide is captured by crops has been a difficult task. I was about to give up my quest for information when I remembered seeing an experiment on this very subject at the University of Gembloux in Belgium about 15 years ago.  So, I mailed an acquaintance at the University and he got me on the academic trail.

Reading the Gembloux papers gets one to step back in wonder, yet again, of the symmetry of the natural world.  It seems that the crops regularly trialled in Belgium (winter wheat, seed potatoes and sugar beet) tended to ensure that organic carbon levels in the soil were maintained in addition to capturing carbon in grain or cash roots and their crop residues. This was in the situation of a medium to heavy soil that had been in arable production for decades and had a soil organic matter content of around 2% in the top 30cm of soil.

The researchers found that a tonne of wheat (at 85% moisture) contained around 35% carbon. This is equivalent to around 1.3 tonnes of the GHG carbon dioxide that has been processed by the crop to produce it. Therefore, a 10 t/ha wheat crop processes, just in the grain alone, around 13 t/ha of carbon dioxide more than what is required to maintain soil organic carbon levels.

There are, of course, some huge ‘buts’.  The Belgium research did not consider the carbon dioxide equivalent of the machinery, fuel and inputs used to produce the wheat nor the nitrous oxide, a potent GHG, that results from microbial breakdown of ammonium and nitrates in the soil. The latest estimates suggest that these total around 275 kg of carbon dioxide equivalent per tonne of feed wheat at 85% moisture content (AHDB, personal communication). This reduces the carbon dioxide captured to produce a tonne of wheat down from 1.3 tonnes to a net 1.0 tonne.

Sadly, it does not finish there.  There can be very significant losses of carbon from the bare soil and crop residues between crops, particularly between harvest and a spring sown crop. Fortunately these losses can be minimised by establishing, as soon as pragmatically possible, an autumn-sown crop or a cover crop where the subsequent cash crop is to be sown in the spring. There is little doubt that the loss of carbon between crops is an issue.

For their own interest, there is an obvious way that farmers can estimate the climate credentials of their cropping system. The amount of carbon they sell in produce is an indicator to the amount of excess carbon their crops have captured over and above that required to sustain soil functions. This is on the proviso that they are, at the least, maintaining, without organic amendments, the level of soil organic carbon (i.e. soil organic matter) over the rotation.  It must be said that maintaining an already low level of organic carbon in the soil is far easier to achieve than where levels are high. When doing this calculation, farmers should also take into account the amount of carbon dioxide equivalent that is in the machinery, fuel, inputs and nitrous oxide involved in the production process.

The biggest influence on the latter is nitrogen fertiliser.  It takes a significant amount of fossil fuel to produce it and deliver on-farm. It also increases nitrous oxide production from the soil. A recent AHDB project (https://ahdb.org.uk/minimising-nitrous-oxide-intensities-of-arable-crop-…) suggests that in winter wheat, on average, the economically optimum levels of chemical based nitrogen doubles yields whilst doubling nitrous oxide production. A simple partial carbon budget clearly indicates that using optimised levels of nitrogen fertiliser in the UK is a benefit in terms of net carbon trapped by cropping systems. This helps to explain why highly-regarded journals report that conventional agriculture results in less GHG production per tonne of produce than organic production.

Whilst these calculations are useful for indicating a sense of direction, they are obviously not acceptable to the IPCC which has developed the international rules. This blog is not intended to deflect from the stated aim of the NFU to ensure that by 2040 the farming industry can demonstrate that it is carbon neutral according to IPCC standards.

What can be done to improve further the climate credentials of arable farming?  Growing vigorous crops and cover crops and, where possible, retaining crop residues is a given. Removing key pesticides from the market will restrict the industry’s ability to grow vigorous plants and so negatively affect their ability to capture carbon. Retaining crop residues may be particularly important for grain maize, which was only grown once in the Belgium study but indicated that the soil would be depleted of organic carbon if the stover was removed from the field. Also, perhaps farmers should begin to ask suppliers to quote the energy cost as well as the financial cost of nitrogen fertilisers.  In time, such fertilisers may well be produced using renewable electricity, which would be a huge step forward in terms of making farming more climate friendly.

Monitoring soil organic carbon on a regular basis is also important.  This is not easy because of the inevitable sampling errors.  This is a subject in its own right and maybe deserves a strict code of practice in order to provide assurance to farmers and their customers.

I fully accept that I have missed out some important issues in an attempt to make the subject sound relatively straight forward. However, it is interesting that the timing of cultivations may be more important than the type of cultivation. I have also avoided discussing the production and use of farmyard manures as it brings farm animals into the equation, which is a huge complication; even more complicated than drawing a whole bunch of bananas.