7th October 2016
print
I recently looked at the results of this year’s and last year’s winter wheat recommended list variety trials on the AHDB website. I was struck by the small differences between the percent yield of varieties in the highest yielding trial, which averaged over 17 t/ha. This spurred me to look at the standard deviation of variety yields in each of the fungicide treated winter wheat recommended list trials in 2012 to 2016.

Standard deviation is simply a measure that is used to quantify the amount of variation or dispersion of a set of data values. The results of this study are expressed graphically in the figure below. This shows that there is no trend in the standard deviation of the yields of the individual varieties (t/ha) and the average yield of the trial. The outlier showing a very high standard deviation was a second cereal on a light soil: this may have suffered from take-all and the records show that it experienced high pressure from septoria. 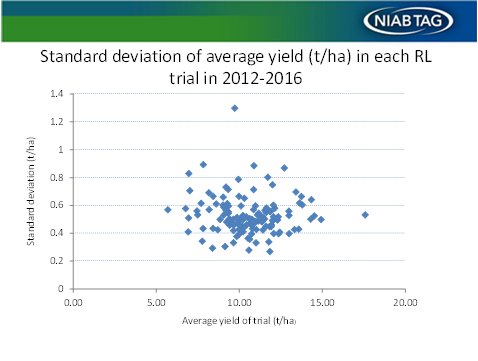 Does this ‘interesting’ observation have any real practical significance? That is a matter of opinion but it suggests to me that variety choice is more critical for low yielding situations, particularly when margins are as tight as they are now.

Looking at the data in another way, when the yield results are expressed as percentages rather than t/ha, overall the spread of individual variety performances in each trial reduces as the mean yields of the control varieties increase. In the figure below, the 2012 data, the lowest yielding year of the five years, has been highlighted. 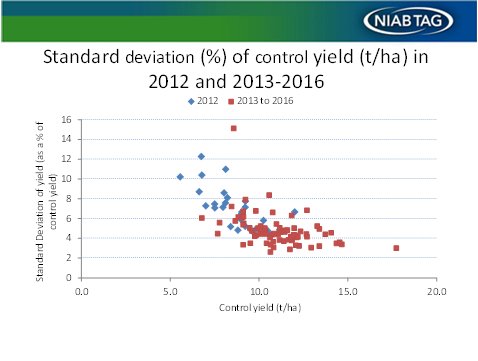 Septoria pressure was very high in the extremely wet summer of 2012. Interestingly, I cannot find any evidence to suggest that there was an association between the level of septoria infection and the standard deviation of the physical yields of the varieties in the individual trials harvested that year. This indicates that the reasons why there are just as large yield differences between varieties, expressed in t/ha, in low yielding trials as in high yielding trials is probably more complicated than a single factor. They are possibly associated with the overall stresses incurred in individual trials that affect some varieties more than others. The trials were stressed by summer waterlogging in 2012 but in other years lack of moisture was a feature. Hence, this type of analysis may not help to improve variety selection in differing scenarios but it does emphasise that variety performance is economically more important in lower yielding situations.