Recent trends in the EU status of pesticides

During a recent update of the status of pesticide regulatory approval in the European Union (EU) it was noticed that a significant number of pesticides included in The Pesticide Manual (PM) were now designated as EU “Not Approved”.

We were curious – was the EU designation of so many pesticides as Not Approved a recent phenomenon or part of a longer-term trend?

In order to answer this question we undertook an analysis of recent trends in EU pesticide classification by comparing the status (‘Approved’, ‘Not Approved’ or ‘Pending’) of pesticides included in the earlier 17th (2015) and 18th (2018) Editions of The Pesticide Manual with those currently listed (July, 2020) in the Pesticide Manual Online  (Table 1).  We chose these particular sources since they provide definitive data on the EU status of a consistent set of pesticides over a five-year time period.  Note that the PM includes only compounds which are believed to be currently marketed and excludes biologicals, botanicals and semiochemicals (e.g. essential oils, organisms, etc.).  The Online Pesticide manual now lists 788 pesticides.

The analysis showed a striking decrease (c. 10%) in the number of Approved pesticides over the past two years (2018-2020), in stark contrast to that of the earlier 2015-2018 period (Table 1, Figure 1).  Further investigation showed that this decrease was due entirely to a change in the EU status of many pesticides from Approved to Not Approved.  Notably, during the 2015-2018 period the number of newly Not Approved pesticides (12) was offset by a near equal number that were newly Approved (11). In contrast, during the 2018-2020 period only 7 new pesticides were Approved while 38 were now designated as Not Approved.

Figure 1. Trend in EU Approval status of Pesticides included in The Pesticide Manual 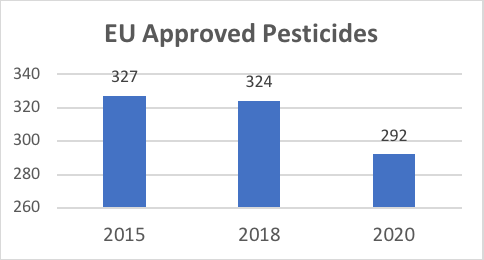 Next, we evaluated trends in the EU status of pesticides by their Field of Use (Table 2).  For the 2018-2020 period, new Not Approved pesticides are divided almost equally between insecticides, fungicides and herbicides – thus, the change in EU status cannot be readily explained by pesticide type.  In contrast, the Field of Use of the few newly Approved pesticides in both the 2015-2018 and 2018-2020 periods is dominated by fungicides.  We note that the 2020 Not Approved list includes some of the world’s most important agrochemicals, including chlorpyrifos, glufosinate and epoxiconazole.

Table 2. EU status changes by Field of Use of PM pesticides.

In an Editorial included in the 18th Edition (2018) of The Pesticide Manual we wrote “pesticide innovation is essential. Pesticide science must (and will) continue to evolve and contribute in order to meet the ever-increasing demands for safe, environmentally-friendly and effective food production.”

Unfortunately, for farmers, the environment and consumers worldwide, the pace of newly approved, traditional pesticides (innovation) has not tracked with the reduction in availability of effective agrochemicals resulting from successive European Union regulations and directives. The latest EU initiative – the “Green Deal” – aims to increase organic farming, reverse declines of pollinators, and reduce risks and numbers of pesticides by 50% by 2030.  So, despite human and environmental safety benefits that will come from targeted pesticide application using precision agriculture technologies, it is highly likely that this trend will continue.