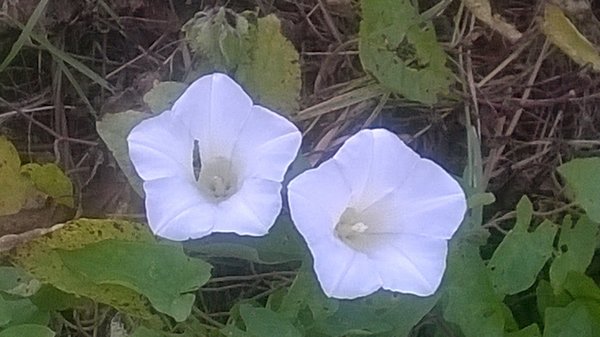 Posted by Jim Orson, NIAB TAG and BCPC Board of Management 22 September 2017

We have just returned from a holiday in the very South of France, where the Pyrenees meet the sea. On one strenuous walk, a loop of around 20  km, we climbed for around 3 hours. Initially there were vineyards, but then trees and then just scrub. At the  highest point of the vineyards we saw a lot of ipomoea growing up wire fences. The ipomoea genus is part of the Convolvulaceae family and have coloured flowers rather than the white flower of our commonly occurring field bindweed (Convolvulus arvensis), pictured below. The ipomoea was in full flower and very beautiful. 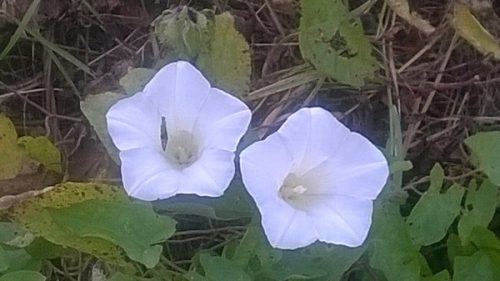 It is amazing how simple observations can lead to associated memories. I have only been asked once on how to control ipomoea, in this particular case morning glory (Ipomoea purpurea) which is pictured at the end of this paragraph. It was on the morning of 15th April 1986. You may be impressed that I could remember the date or you may think I keep meticulous records of the inquiries I receive: not a bit of it. It was a Breckland farmer who made the inquiry. He also told me, well before the news broke, that US Air Force fighter bombers and their re-fuelling aircraft had that morning taken off from nearby Lakenheath and Mildenhall to bomb Libya. I have just checked the date of the raid to inform you precisely when the inquiry was made. 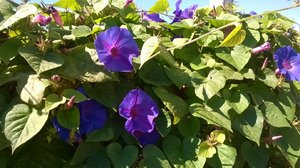 I had become accustomed to inquiries from the Breck on the control of exotic weeds. Vegetable crops are widely grown on these sandy soils in East Anglia. In those days imported seed was regularly used. This seed used to include the occasional ‘stranger’. The most common introduction was barnyard grass (with the wonderful scientific name Echinochloa crus-galli) in carrot seed. The ipomoea inquiry was a little different as in the previous year it had mysteriously appeared growing up one of the farmer’s isolated tall wire fences and had survived the winter. Later, I found out that its seed contains psychedelic chemicals which may have been the reason for its sudden appearance along a significant length of fence line. I assume the glyphosate applied at the time of the appearance of the first flowers saw an end to it.

None of these occasional introductions resulted in the establishment of field infestations in the Brecklands. Thankfully, they were a novelty rather than a threat.

In fact, I cannot think of a recently introduced annual weed causing issues in arable crops in the UK. We thought that awned canary-grass, that became a field problem in some limited areas in the early 1980s, was a new introduction but in fact it was recorded in field crops a century earlier. More recently, more infestations of rat’s tail fescue (Vulpia myuros) have occurred in no-tilled crops but it appears that it too has been around in our crops for a long time. NIAB TAG is currently doing some research on the control of this weed.

However, over the centuries there have been significant introductions of plants that have become major arable weeds in this country. The most significant being black-grass, wild oats, rye-grass and common poppy. Botanic databases have three categories of plant introductions; native, archaeophytes and neophytes. For this blog I have used the database of the Biological Records Centre.

Native species were around when cultivations and crop production were first practised in Britain. These include chickweed, knotgrass, redshank, annual meadow-grass, rough meadow-grass, Yorkshire fog and meadow brome. Anyone familiar with the novel will be happy to note that the scarlet pimpernel is also a native species! It is interesting that the native annual broad-leaved weed species tend to be those that commonly occur in current spring-sown crops.

Neophytes are those considered to have arrived in Britain with the opening up of inter-continental trade. The threshold seems to be since 1492 when Christopher Columbus arrived in the New World. These species include awned canary-grass, winter wild oat, common field-speedwell and Italian rye-grass.

The problems with introduced weeds are not restricted to arable agriculture. The perennial neophytes, Japanese knotweed, giant hogweed, Himalayan balsam and rhododendron (ponticum) can cause real problems, so much so that it is illegal to plant them in the wild or to cause them to grow in the wild.

Perhaps the country whose land is most affected by non-native weed species is New Zealand. They currently face the challenge of the very recent introduction of velvet leaf, a really nasty annual arable broad-leaved weed. Whenever I spoke on weed control in NZ I was jibed about Britain sending them all their weeds. I had to explain that this was not true because it was their ancestors who brought the weeds with them. Britain is innocent of all charges!?