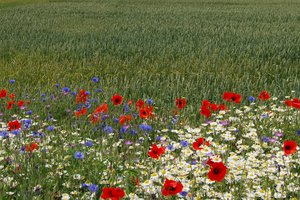 Posted by Jim Orson, NIAB TAG and BCPC Board of Management 31 March 2017

I tend to be in despair over the quality of debate on new agricultural technology. This is because of the standards adopted by those who oppose such developments. In some ways it is comforting as it demonstrates that they cannot find facts that agree with their motives; all we get is fake news and fake science.

Take GMs. These are back in the news, partly because of the realism of the Princess Royal. She is a star in our family because of the immense amount of often unpublicised time she spends supporting the Save the Children Fund. My wife devotes much of her time to the charity and is very aware of the level of support it gets from Princess Anne.

Princess Anne’s comments on GM are in stark contrast to those of her brother, Prince Charles, who describes GM as “a gigantic experiment with nature” that will end with an ecological disaster. This statement does not give enough credit to nature where some of the processes used in GM occur naturally. For instance the sweet potato contains genes introduced, not by natural crossing, but by an agrobacterium. This fact does not seem to affect sweet potato sales at our local Waitrose.

The responses to Princess Anne’s comments were all too predictable, including the tired comment that GM creates ‘super weeds’ because some weed species have developed resistance to glyphosate. The green blob makes the fatuous and totally untrue assertion that this weed resistance has spread somehow from the GM herbicide tolerant crop. Ask any black-grass grower in England and they will be able to tell the green groups that you do not need GM crops to create ‘super weeds’.

However, there is some heartening news that attitudes to the negative stories on agricultural technology promulgated by the green blob are slowly changing. Some of the scare stories based on studies that they have funded and that are of contestable scientific quality are either not being mentioned by news organisations or are getting short shrift from them.

I was particularly heartened by a headline in The Times on 11th March which read “organic food is risk to the planet”. This was a comment on a Canadian review of the productivity and the environmental impact of organic and conventional farming. On a per tonne of output basis, there was no difference in environmental impact. The authors of the scientific paper did not say that organic food is a risk to the planet.

That was the interpretation by the science editor of the paper. His argument is that because there is no difference in environmental impact per tonne of production, significantly less land is required to produce food conventionally. This will not only help in sparing the current wild lands but will also allow some of the currently cultivated land to be devoted specifically to biodiversity.

It could be argued that this conclusion may be questionable in the UK because our commodity food production is more reliant than most on inputs. However, it was comforting to read a paper in the Journal of Applied Ecology that also concludes that on a per tonne of output basis the environmental impact of conventional and organic winter cereals production in England is very similar. However, the fields surveyed in the study were in winter cereals only and so the biodiversity friendly grass/legume fertility building breaks in organic rotations were not taken into account. Hence, there is a need for conventional farmers to devote some land and management time to support biodiversity.

There are continuing and immense problems getting GM crops registered in the EU. As the recent leader of The Scotsman puts it “It seems that unscientific stance [on GMs] is a luxury the Scottish Government thinks we can afford at the moment, but it has to be wondered what that decision says about us as a nation.” What it is really saying is that while the current European political structures deride populism, their very own anti-GM stance is a prime example of anti-science populism.

Finally, I recently had a ‘did he say that’ moment. Did Tony Juniper, the well known green campaigner, really say on Radio 4 that he did not have a problem with GM resistant potatoes where the resistance genes were derived from wild relatives? (Listen here and fast forward to approximately 1 hour 50 minutes). I am pretty sure that he did. Now that is a step towards scientific enlightenment. Can we now remove the enormous fences and the security guards that protect the current GM trials in this country? I suspect that we all know the answer to that!