Ladies of a certain age could not stop talking about scything following the most recent series of Poldark. I took this as great news, assuming that they were interested in the traditions of agriculture. In order to reinforce their new found enthusiasm, I offered to show them the proper technique for scything. This was because the actor in Poldark (Aidan Turner) appeared to be lunging at the grass rather than cutting it, something that was recently highlighted in the Sunday Times. My offer was met with a total lack of interest and mutterings about scything topless. A further offer to scythe bare-chested was met with near revulsion. It then clicked, it was not the scything but the bare-chested Aidan Turner: an example of jumping to a false conclusion by not taking into account the whole picture.

It is currently estimated that average winter oilseed rape yields in south Yorkshire and further south are down by around 10% this year. It may be that, like winter barley, the average yields will increase when the results of the harvest further north are taken into account. The question is what has caused this disappointing yield. Obviously the ravages of Cabbage Stem Flea Beetle reduced yields in some areas but yields also seem disappointing in crops unaffected by this pest.

There was talk a few years ago that oilseed rape yields were very dependent on good rainfall in June. This was based on a graph that appeared in the introduction to HGCA (now AHDB) project report 402. This graphed the field yields at Boxworth near Cambridge and June rainfall.

The project quite rightly argued that oilseed rape yields are very dependent on conditions during grain fill because, unlike wheat, final rape yields depend little on reserves in the plant. Moisture availability is, of course a major factor. However, it has to be pointed out that in wet weather there are lower levels of solar radiation, thereby reducing photosynthetic activity and also that correlation does not necessarily mean causation.

This year, despite good supplies of rain in June in most of England, yields are below average and so is the graph above the researcher’s Poldark moment? Maybe other factors were at play to cause annual variations in field yields and the fitting of one line through field yields on one farm was not indicating the right conclusion. This appears to be reinforced by the terrible yields in 2012 when there was no shortage of rain in June.

In HGCA project report 502 a different conclusion was drawn on the influence of the weather on oilseed rape yields. It identified autumn conditions that could possibly lead to the development of an effective canopy and the establishment and retention of a good root system. In addition, similar to analyses in wheat (see blog posted on 8 July), it suggested that good levels of sunshine and low rainfall in April contributed towards higher UK yields. No association between June rainfall and rape yields was identified. 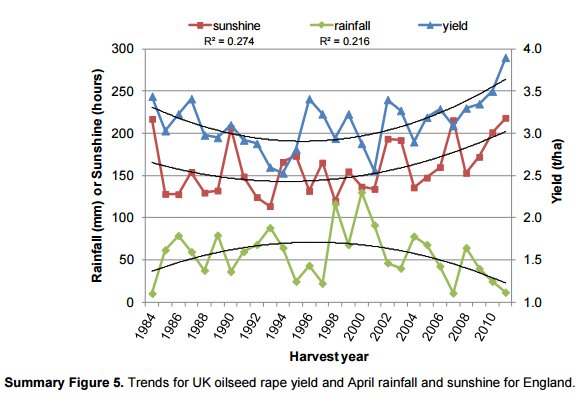 In this case, the researchers suggested that sunny and warm conditions in April resulted in good levels of photosynthesis and pollination. In contrast, March and April this year were cold, which delaying flowering, and also rainfall was generally above average. However, there may be other factors involved. The years 2011 and 2015 were good years for rape yields and both had very dry springs. This would have enabled good spring root growth, unimpaired by even temporary waterlogging. Hence, nutrient efficiency and the ability to explore the soil profile for water were improved. Therefore, perhaps the ability to access water during pod fill is the key rather than rain in June at a time when the level of photosynthesis is critically important. This is, in fact, the conclusion of the actual field research done in HGCA (AHDB) project 402.