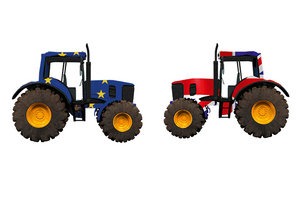 22nd July 2016
print
I usually read the opinion columns in The Times. They are generally thoughtful and at times provocative. However, I was dismayed by the lack of understanding of agriculture shown in a piece by Emma Duncan on 9th July. She is an assistant editor of The Economist and so, in my view, should be more aware of how the economics of the industry ticks.

She was a Remainer and starts the article by saying that she has been looking for some good news from Brexit. She says that she has found solace that Brexit is likely to be bad news for ‘greedy farmers’. It appears from the article that she has complete disdain for the industry.

Her conclusion is that after Brexit there will be less support for agriculture leading to lower food prices, less intensive systems and land going out of production, so there will be more land available for building houses.

She is clearly thinking that we are receiving price support rather than support for eligible land area. Price support generally disappeared a couple of decades ago, although the sugar price is supported for another year or two. Hence, we are already competing in world markets and so removing current support measures will not reduce the product prices received by UK farmers.

As for making more land available for building houses, landowners already jump at the opportunity to get building permission. We do not have to see land going idle before they are willing to sell!

What really concerns me about this article is that an opinion-former is unaware of the real issues of food production in the UK. This does not bode well for public support for any agricultural subsidy arrangements post-Brexit.

To add to my concerns, Andrea Leadsom, the new Defra secretary, also seemed at one time to be unaware of the market issues relating to agricultural products. She has been quoted as a supporter of “reducing burdensome EU red-tape, saving farmers time and making food cheaper” and in 2007 argued that farming subsidies must be abolished.

I realise that there is a real hope that red tape can be reduced, but I think much will have to continue to reassure our customers that we have a transparent and traceable food chain.

Brexit may mean a return to more scientifically based decision-making, particularly for pesticides. Interestingly, there is concern expressed by some in the wider EU that decision-making will suffer because of less input from British scientists.

The future may possibly hold some advantages from Brexit but there is a huge challenge ahead to inform decision-makers, opinion-formers and the general public of the true context and importance of food production in the UK. Judging by the article in The Times, there is a long way to go.

Pesticide Regulations post-Brexit is a major theme of The BCPC Congress at Brighton in early October.