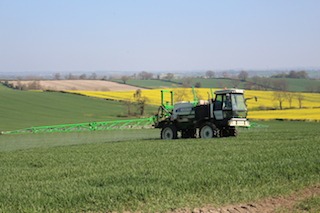 The European Food Safety Authority (EFSA) has just published the results of its survey on pesticide residues in EU foodstuffs in 2013. EFSA’s surveys are amongst the most comprehensive worldwide; the Agency tested 81,000 samples of crops grown in, and imported into, the EU, with particular emphasis on foods where higher residues have been found in previous years. The Authority found that over 97% of samples were below Maximum Residues Limits (MRLs), with over 50% of samples having no residues at all. There were relatively more detects in imported food that in EU-produced produce. Residues detects had fallen for all food products since 2010.

The Authority concluded that the presence of pesticide residues in food was unlikely to have a long-term effect on consumer health.

“These results are very gratifying” says Dr. Colin Ruscoe, Chairman of the independent British Crop Production Council (BCPC). “MRLs are a measure of residues found when pesticides are applied according to approved label rates, using good agricultural practice. They are not specific thresholds of safety concern, which can be much lower.” In fact, the EFSA report shows that only 1% of samples had residues at levels where safety concerns might arise – and even these levels have safety margins built-in, such as assuming that fruit is not washed or peeled, and consumed in large quantities.

Despite this encouraging picture, popular Press mention of EFSA’s report continues to focus on any findings of residues. For example, fungicide residues were found in UK strawberries. “This is hardly surprising,” says Dr Ruscoe. “Fungicides have to be used to prevent grey mould, which many consumers will remember was once a widespread cause of unacceptable deterioration of fresh strawberries”.EFSA found just four instances above the MRLs for residues in UK strawberries, out of 194 samples.

The EFSA report paid particular attention to pesticides in baby foods, previously a particular cause for concern. Forty samples of “organic” baby food contained pesticide residues. “Although these were at safe levels, this emphasises that, contrary to popular belief, an “organic” label does not mean that no pesticides have been used,” said Dr. Ruscoe. “Most importantly, EFSA’s findings show that EU farmers are very diligent in applying pesticides at approved rates of use, and that their produce is safe for EU consumers.”