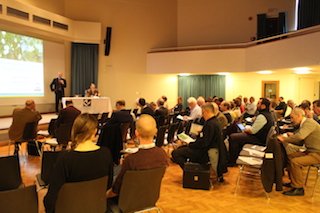 British farmers and growers are facing increasing problems with managing weeds, due to the rise in herbicide resistance, the decline in the number of products available and increasing environmental restrictions. Weed control used to be relatively simple and cheap! Now it isn’t. This year’s Review explored current problems and how they might be addressed.  What is the true cost of weed control?  How should we go forward into the future?

James Clarke of ADAS UK Ltd, representing the UK Weed Resistance Action Group (WRAG), gave the first presentation about the potential for glyphosate resistance in the UK.  WRAG is to be commended for its pro-active initiative to make users aware of the potential problems of glyphosate resistance that growers in N. America are already facing.  Although glyphosate resistance is not currently present in the UK, the characteristics of some of our grass weeds and our usage of glyphosate, could lead us down the road to resistance. James highlighted the risks to both arable growers and to industrial/amenity users and drew attention to the AHDB guidance notes that users should refer to if the UK is to avoid the loss of this valuable herbicide

The next speaker, Jock Wilmott of Strutt & Parker, considered – the financial cost of weed control. He showed that herbicide costs (£/ha) in winter wheat and oilseed rape had doubled since 2006 due to price changes and the increased number of products used. This was mainly because of the rise in herbicide resistance in black-grass.  He concluded that total fixed costs on a heavy land farm had increased by 6%, which often equated to the farmer’s profit!  Managing resistant black-grass was making weed control a complex issue, where good timing and sound decisions were critical.  For example, delaying drilling is a useful tool in decreasing weed infestations and enhancing herbicide performance but it could increase the risk of wet weather adversely affecting field activities. How these complex issues are resolved is the key to successful crop production.

One of the costs of weed control not always adequately addressed is the impact of farming on the wider environment.  Jon Gulson of theEnvironment Agency updated the audience on the current situation regarding the presence of pesticides in surface and ground water. Pesticides compromise a small but significant number of water catchments in England and Wales.  Although the main problems are associated with the molluscicide – metaldehyde, the herbicides propyzamide and carbetamide are also at risk.  It was concerning that glyphosate and other common herbicides, were also being recorded.  The industry sponsored Voluntary Initiative (VI) was doing a lot to make farmers and growers aware of best practices but Jon feared that full compliance could not be achieved by these initiatives alone. The industry still needs to improve its environmental footprint.

Having focussed on weed problems that revolved around the intransigent grass weed, black-grass, the afternoon started with presentations from Lynn Tatnell (ADAS UK Ltd) and Mark Ballingall(SRUC) on the problems of herbicide resistance in the broad-leaved weeds poppy, chickweed and mayweed. Although not a major problem yet, resistance to the aceto-lactase synthase (ALS)-inhibiting herbicides was increasing. Alternative products are available but are more expensive, so farmers are reluctant to use them. They may also be at risk in future legislative restrictions. The long dormancy of seeds of these weeds means that any resultant resistance would remain for many years so farmers need to be made aware of this problem and industry needs to retain alternative herbicide options.

The declining success of weed control ‘from a bottle’ has lead to greater interest in novel and other alternative technologies but as yet these have not been widely adopted. Derek Cornes of Syngentadiscussed a range of novel techniques in development. GPS guidance and electronic control systems for both cultural and chemical application systems are already on the market, although adoption is limited to high value crops that can ‘justify’ the greater costs and where conventional herbicides are often no longer available. Similar technologies are driving forward the detection and treatment of weed patches, thus reducing the environmental footprint of herbicides True robotic weeders are in development but it may be some time before they will be seen in practice.  Biological control is also being explored but so far has not delivered practical tools. Finally, although GM crops are politically not acceptable in the EU at the moment, other genetic techniques could lead to novel control options.

Concluding the sessions Jim Orson (NIAB/TAG) used his crystal ball to consider the future of weed control. He thought that ‘science in a bottle’ would still be the backbone of conventional weed control but that the industry needed to move towards more ‘sustainable intensification’, maintaining yields but reducing impacts on the environment. Every operation can help to minimise weed problems and the aim must be to reach a goal where fields are infested with minimal levels of weeds. The key is attention to detail and for each field to be managed individually. Jim believed that electronics, and GPS computer systems would improve weed control and reduce environmental impacts. Good training for farmers and advisors and the optimum use of novel computer and mobile phone based communication are also critical.

In summary there are no simple solutions for weed management in the future. The cost of weed control is increasing and becoming more complex. New technologies will help but optimising management practices and attention to detail is key to good weed control and minimising environmental impacts. Existing products need to be handled with care to avoid more resistance and loss of any more herbicides from the marketplace.