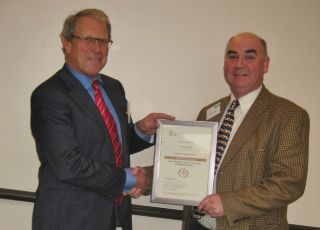 BCPC Awards 2014 weed out the best

BCPC recognises contributions in academic research, pesticide regulations and knowledge transfer to benefit crop production with this year’s BCPC Awards. Since its inception in 1985, BCPC has been pleased to present over 50 BCPC awards. This year the two recipients were: James Clarke from ADAS and Dr. Stephen Moss from Rothamsted Research.BCPC Chairman, Dr. Colin Ruscoe presented the awards at AAB/BCPC’s conference ‘Crop Production in Southern Britain’, held at the Peterborough Arena, 25-26 November 2014.

James Clarke graduated from Reading University with a degree in Agriculture and has been working for ADAS since 1979. He began his career as an agricultural advisor in Essex, Hertfordshire and Norfolk. From 1987-2002 he held posts at ADAS Boxworth, as agronomist, team manager and Arable Technical Manager, where he was Project Co-ordinator for a large number of Defra, HGCA and industry funded farmland projects.

He is an acknowledged expert in crop agronomy, farming systems and weed management, with strategic roles in major projects on farming systems, assessment of carbon footprints and sustainability, use and impact of plant protection products, and weed management. Recent project involvement includes work on farmland biodiversity (SAFFIE), developing Weed Manager (a decision support system for winter wheat), a weed encyclopedia, and weed ecology.

As well as James’ current role is as Associate Director, Science and Business Development Manager: ADAS Soils, Agriculture and Water, he is Chairman of the Pesticides Forum, its Indicators group, and of the Weed Resistance Action Group. He is a Member of RSPB Lowland Farm Project Advisory Group and was an Independent Member of the Advisory Committee on Pesticides (ACP) as an expert in efficacy and farming systems.

On receiving his award, James said, “I am honoured to receive this award from BCPC. My interaction with BCPC, AAB and other bodies has allowed me to learn from people with wide experience and knowledge of crop production, agronomy, crop protection and specifically, weed biology. There has never been a greater need for good evidence on which to base decisions.  A sound basic knowledge of biology has always been very important and is even more relevant now with greater need for integrated control options and stewardship of the narrower range of plant protection products. It is vital that evidence from good science is blended with practical needs. I hope that the funding of applied science and knowledge transfer allows this to accelerate.I am confident that working with the new scientists and practitioners, such as we have brought into ADAS, and interacting with those in the wider industry, we will be able to meet the food security and environmental challenges. Thank you BCPC, ADAS and the wider industry.”

On learning of his award Stephen Moss said, “I amvery grateful to BCPC for this award and like to think it is in recognition for the constructive and productive dialogue I have had with all sectors of the agriculture industry over the past 40 years which include the agrochemical industry, distributors, consultants and farmers as well as research colleagues.”

Stephen’s career in weed research has concentrated largely on grass-weeds, especially black-grass (Alopecurus myosuroides). Starting in 1975, following his BSc in Agriculture at Wye College in 1972, he worked at the Weed Research Organisation (WRO), then Long Ashton Research Station, where he gained his PhD before joining Rothamsted Research in 1990.

Stephen has given many plenary, keynote and other presentations at major international conferences in the UK, the US, Australia, Iran and Belgium. He has published 208 research papers, book chapters and technical reports, and contributed to over 282 articles in the popular farming press. Over the last 20 years he has provided numerous informative talks to farmers, consultants and agrochemical company technical staff. This emphasis on active knowledge transfer was emphasized by him being presented with the RASE Technology Award in 2009.