A glimpse into the future

Views from: Graham Jellis, BCPC Board of Management and Chair, Agrifood Charities Partnership.

Once upon a time I used to return from two days at the Cereals Event feeling pretty exhausted, having been on the HGCA (now AHDB) stand talking to levy payers, scientists etc. for many hours. Nowadays I am much more relaxed and can visit the stands which interest me, talk to colleagues and ex-colleagues and generally have a good time. I really enjoyed watching the Harper Adams University (HAU) hands-free combine harvester at work making an impressive job of cutting a plot of winter barley. The 30-year-old Sampo plot combine is guided by open-source global navigation satellite systems (GNSS), as used by small-scale drones. This is the first time that the machinery has been operated away from the university campus, and it did a great job. If you didn’t see it, click on this link for a short You Tube video clip! The demonstration was just part of HAU’s exciting work on robotics in agriculture – a real glimpse into the not-too-distant future. 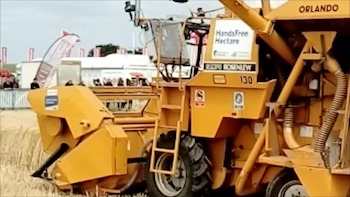 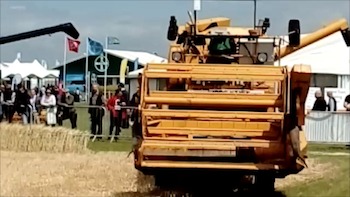 But, as a plant pathologist, what I particularly want to talk about here is the new DNA Auto Spore Trap which was being demonstrated on the Rothamsted Research stand. This is mainly because it looks very impressive and could revolutionise disease monitoring in crops but also because it takes me back to my early days as a plant pathologist and Dr (later Prof.) Jim Hirst. The first time I met Dr Hirst was when I sat opposite him in an interview, trying to convince him, and others, that the Potato Marketing Board should give me a grant for a PhD. By that time (the late 60s) the ‘Hirst Spore Trap’ was well established (he first published on it in 1952) and the Burkard Manufacturing Company had made a version which worked for 7 days, trapping spores on the surface of a rotating drum. My research was probably not going to involve spore sampling but I knew the name and the reputation (incidentally, I got the grant!).

So, 50 years on I was very pleased to learn that Hirst’s and Burkard’s work was still being developed – and furthermore that Rothamsted Research, where it all started, was the lead science partner in the project, with Prof. Jon West as the lead researcher (incidentally, Jon is also the Secretary of the BCPC Diseases Expert Group).  However, unlike in the early days, the project now involves other research groups and industrial partners, with funding from Innovate UK and the AHDB. Burkard are still heavily involved in the manufacturing and marketing of the samplers. 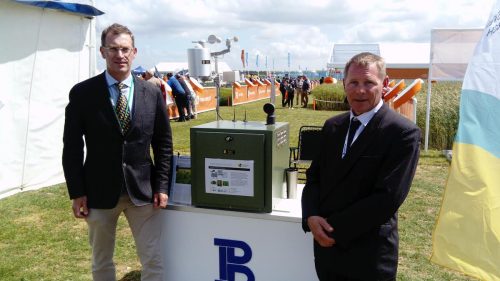 Whereas once upon a time spores had to be identified and counted by the operator, now the instrument can detect the amount of spores of a target species collected during the sampling period by analysing the DNA sequence of that species. The results are then sent wirelessly to a server. Furthermore, the unit also has its own on-board weather station allowing both spore release and weather data to be combined with disease risk models to inform growers of infection risk in their area via a web page, allowing them to take prompt action.

Although the project is still in its infancy, its potential power is really impressive and could make a step change in our ability to forecast disease and allow growers to treat it in a timely way and only when necessary. Currently the sampler is able to detect potato blight (Phytophthora infestans) which is very appropriate given the speed at which the disease develops and the devastation it can cause. Various models for forecasting blight have been developed, based on temperature and humidity. For the UK, the recent ‘Hutton Criteria’ seems to be a considerable improvement on the ‘Smith period’ and the earlier ‘Beaumont period’. By combining advances in spore trapping and identification with advances in our understanding the environmental conditions needed for infection, could we dare to hope that growers could have a really reliable system?